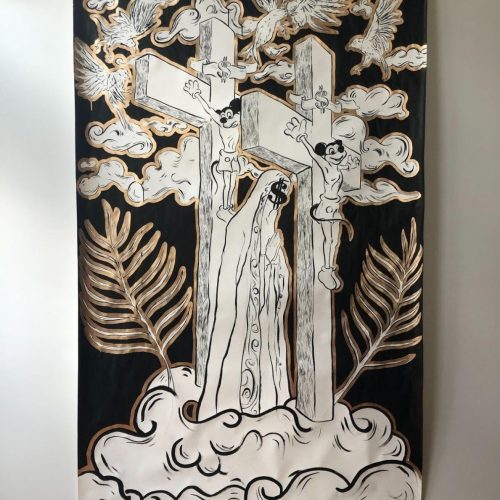 In a globalized world, it is difficult to exist without influences from the West in our education, identity, and biases about the world in general. This is a reality that has been so deeply and thoroughly engrained in my understanding of my environment and myself that it is easier to embrace it than it is to reject it. Thus, Western themes such as capitalism, Catholicism, and colonization have become consistently prevalent my work. The drawing “Ecstasy” depicts the ecstasy of St. Teresa, the Catholic saint which my middle name, Theresa, is based on. Up until I enrolled in university, I was called this
name instead of my Vietnamese first name. This was a name that never felt natural on my tongue as well as one that I was eager to get rid of once I graduated high school. While the presence of these Western influences leads me to question my authenticity and validity as a Vietnamese person, perhaps the only way to enrich my identity is to intimately and critically examine the parts I do not want to accept (aka: know your enemy).

Quynh Vu is an artist and student currently pursuing a Bachelors in Studio Art at Wake Forest University. Her work reflects the continuous process of attempting to understand her identity as a Vietnamese American woman – an identity that invokes strong sentiments towards both Western and Vietnamese culture and history. Working primarily in 2-D, Vu directly confronts the lasting impressions of Western influence on modern social dynamics.