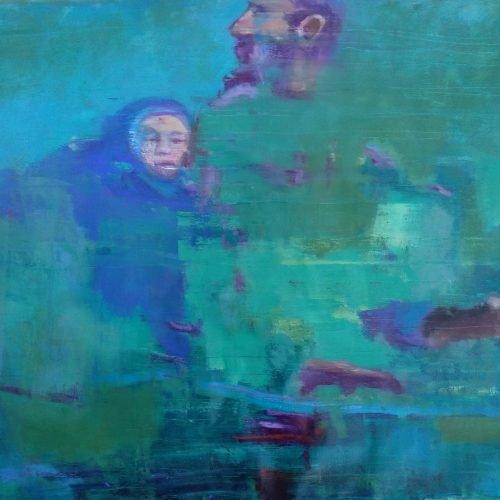 For decades, the Swiss artist Luis Coray has made a name for himself as a visual artist and performer. His paintings register an interplay of light and shadow, and dialogues between past and present, loss and recovery. Coray’s sensitive visual language often reflects his unique cultural identity: Romansh, an ethnic minority from the remote Swiss Alpine regions who speak an ancient endangered language. He studied art history at the University of Zurich and visual design at the Zurich University of the Arts. Additionally, Coray has trained with contemporary luminaries: conceptual artist Not Vital at the Academy of the Art School Liechtenstein and performance artist Tino Sehgal at the Beyeler-Museum, Riehen. His work has been exhibited in Switzerland and Germany and can be found in private and public collections including Graubündner Cantonal Bank, City of Chur (Switzerland), Canton Graubünden, the Lia Rumantscha Institute and RTR Radiotelevisiun Svizra Rumantscha, Cuira. His awards include the 2015 Arts Award from Canton of Grisons, Berlin Department of Culture Studio residency and the 2008 Cultural Contribution prize in Grisons. He lives in Chur with his wife and three daughters.