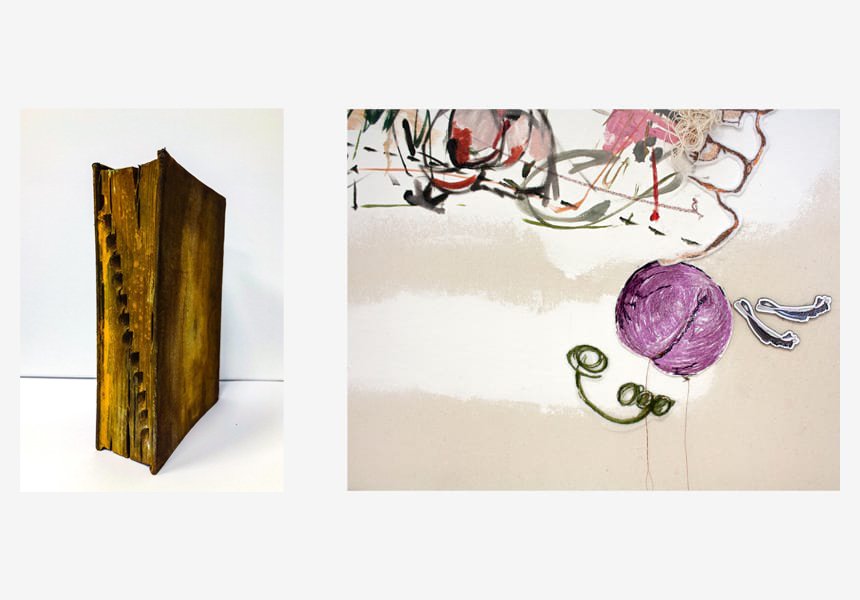 Posted at 12:53h in Upcoming Exhibitions by Elder Gallery of Contemporary Art
0 Likes

Moderated conversation with the artists: Friday, February 7, 2020 from 10 – 11:15a
Join Lia Newman, Director and Curator of the Van Every/Smith Galleries at Davidson College for a conversation with Carmen Neely and Paul Travis Phillips about how language is both a starting point for their work and a limitation on verbal expression. Coffee and light bites. RSVP required: Ashley@eldergalleryclt.com

Language fascinates, inspires and challenges us. Once viewed as a fixed structure imposed upon the world, language is now perceived as more fluid and intimately bound up with our everyday practices and forms of life. Yet words are often not enough. As philosopher George Steiner summarized: “Language can only deal meaningfully with a special, restricted segment of reality. The rest, and it is presumably the much larger part, is silence.”

That silence is the launch pad for this exhibition that brings together two artists who explore language at opposite ends of the spectrum. Carmen Neely discovers matters and ideas through the process of making, focused on the creation and evolution of gestures; Paul Travis Phillips sifts through what exists and explores the logic of language and the moments when knowledge and insight are first conceived. The resulting works of art break through the walls of language and invite the viewer into a space of wordless understanding.

Carmen Neely’s practice centers around expressions of identity and memory through the vehicle of gestural abstraction. Current projects explore the use of material as both metaphor and narrative agent, incorporating objects such as plexiglass, embroidery, and resin. With these materials, Neely translates previous gestures in paint and re-inserts them back into the world from which they came – creating new compositions. Through confronting tensions between such mediums imbedded in the genre of painting, she imbues conversations about mediated communication.

Neely’s mixed media paintings, drawings, and sculptural works have been featured nationally and internationally, and she has exhibited at art fairs in Miami and Dallas. She has been a resident artist at Sparkbox Studio, Vermont Studio Center, and The McColl Center for Art + Innovation. Her work has been featured in Art in America, ARTFORUM, and Hyperallergic. She currently teaches Drawing and Painting as a Visiting Assistant Professor at Oklahoma State University. Neely earned an MFA in Studio Art from The University of North Carolina at Greensboro in 2016, and a BFA in Painting from The University of North Carolina at Charlotte in 2012.

Paul Travis Phillips is a Winston-Salem based interdisciplinary artist and instructor. His work is concerned with the reductive, and potentially destructive nature of language. Phillips co-opts and subverts traditional sources of information such as books, articles and notes to explore the nature of language as it relates to the search for knowledge and meaning. The resulting paintings, installations, videos and resurfaced objects inhabit the space between this and that, here and there, confusion and understanding, inarticulate and nameable. Phillips’ work is about philosophy and the limits of language, both written and spoken, and the deconstructed nature of his pieces allow the viewer to venture as far as they are willing in a philosophical search for meaning.

Phillips has exhibited his paintings, mixed media work and videos across North Carolina and in New York, including at Southeastern Center for Contemporary Art, the Ackland Art Museum and Duke University. Phillips has been an artist in residence at Milligan College and VCU Space and earned his MFA in Interdisciplinary Studio Art from the University of North Carolina at Chapel Hill. He frequently presents on his research and conceptually driven works and is Full-Time Interdisciplinary Faculty at Rowan Cabarrus Community College.